Move United’s USA Wheelchair Football League is expanding from four cities to nine, including Tampa, to give athletes with disabilities a chance to compete against the best adaptive football players in the country.

Ryan Lindstrom, a Navy veteran and quadriplegic athlete, was attending technical school when he was partially paralyzed in a car crash. His recovery sparked a love for nearly every kind of wheelchair athletics, including wheelchair rugby. 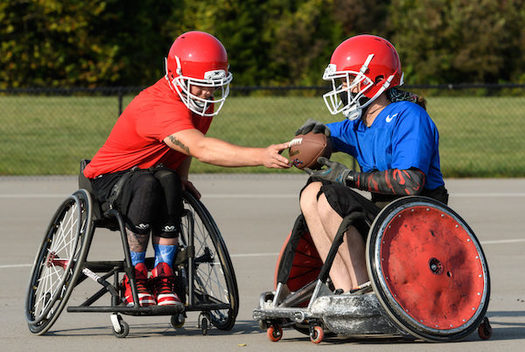 He’s competed at the highest levels, just shy of making the USA Rugby Olympic team, so Lindstrom said he could not miss a chance to try out for the new wheelchair football league.

“It’s one of those new sports that’s just coming out for us, so it’s exciting to be in on the ground floor and get out there and try something different,” Lindstrom explained. “And then, you know, the tryouts, I felt they went pretty good, we had a good time, we had a pretty decent turnout.”

The expansion is funded in part by the National Football League and the Bob Woodruff Foundation. An additional tryout session will be held July 31 in Tampa. Then, all nine teams will compete this fall in the league’s inaugural season.

Lindstrom encouraged everyone, especially people in wheelchairs, to be more active, compete and see what the body is capable of. Among other things, he’s played rugby, basketball, softball, tried hand-cycling and archery, and now, football.

“It’s a new sport for everybody, so we’re all still learning the rules, still learning how it’s all working out,” Lindstrom noted. “Like, I’ve been going over the rulebook myself, just sitting here at the house and stuff, because you’ve got to figure out what rules change, what rules stay the same, for football.”

According to Move United, the grant that made the expansion possible will also help grow the sport through coaching education and learn-to-play clinics.