The movement to restore the Bears Ears National Monument in southeast Utah gets a major boost this weekend when a hand-carved symbolic totem pole makes a stop Saturday on its tour from the west coast to Washington, D.C.

The Red Road to D.C. Totem Pole Journey is designed to highlight sacred sites across the U.S. that are at risk.

Angelo Baca, cultural resources coordinator for the nonprofit Utah Dine Bikeyah, a group working to restore and protect the national monument, explained the tribes of the Bears Ears Inter-Tribal Coalition are asking the Biden Administration to restore a significant portion of the area that was removed in 2017.

“We will want the full restoration and possible extension of the Bears Ears landscape, because it’s the right thing to do,” Baca contended. “Historically, socially, culturally and environmentally, a restoration of justice.”

Shortly after taking office, then-President Donald Trump reduced the size of Bears Ears by 85% and neighboring Grand Staircase-Escalante by half. Former President Barack Obama ordered protected status for the areas in 2016.

Baca noted the totem pole’s stop at Bears Ears is symbolic of tribal nations supporting each other. 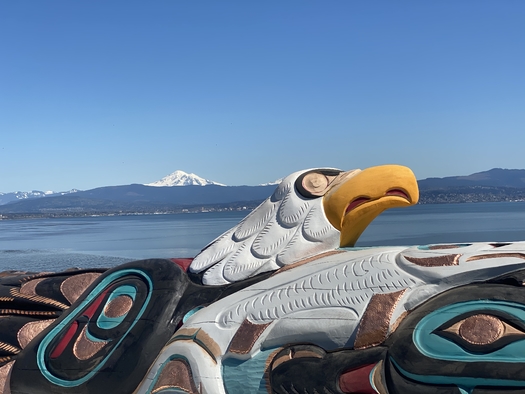 “We’ve always pushed for the original proposal, the 1.9 million acres that need protection,” Baca pointed out. “We’ve maintained the reduction by the previous administration was not done in good faith and on shaky legal ground.”

The totem pole was hand-carved by Jewell James, a member of the Lummi Nation in Washington state, in honor of Native American Deb Haaland’s being appointed Secretary of the Interior.

Following its 10-stop tour, the totem pole will be featured in the Smithsonian National Museum of the American Indian.

“The significance of the totem pole stopping in Bears Ears is the solidarity and expression of support from many tribes across the nation for protecting sacred land,” Baca remarked. “This is just a continuation of that respectful relationship that’s already been established.”

A blessing ceremony for the totem pole is set for 8:00 a.m. Mountain Time at the Bears Ears Monument. For those who cannot attend, the event will be livestreamed on Facebook.

Support for this reporting was provided by The Pew Charitable Trusts.