Solving the Problem of Damp in Basements

Chris Michael, Managing Director of leading British air treatment specialist Meaco, looks at damp problems that can arise in basements, and gives suggestions of how to resolve them.

Basements are either partly or wholly below ground, and can come in many forms. They can be simple cellars built below the footprint of the building, without windows, or on a sloping site, with one or more walls exposed to provide natural light and an external entrance. There are many examples of older properties where a basement extends under a pavement.

The presence of damp in a basement is often taken for granted, easily detectable by a musty smell, mould growth, or by the appearance of water which appears on retaining walls or floors. The source of the damp can be from the exterior, due to penetrating or rising damp, or through leaking land drains and sewers. It may also be the result of condensation or leaks from internal services. It can result from humid air entering a basement, coming into contact with cooler walls, so increasing the relative humidity to the point where it condenses and water droplets can be seen. Even before this point mould can start to grow and this is often the hidden problem in a basement. It’s the mould growth that causes the musty smell and damages furnishings, and can be harmful to health.

How to reduce damp in basements

Take the time to trace the source of basement moisture. The first port of call for homeowners who discover damp in basements is often to go straight to an expensive solution like professional damp proofing. Basements can be damp for a variety of reasons and some of those are straightforward to treat with very little expenditure, so it’s always worth taking the time to trace the source of the damp, bearing in mind there could be more than one source.

On pipework – if you see condensation or moisture on the pipework in your basement, this could be causing damp at points where the pipework meets other areas of your space – like the flooring. For damp basements with this problem, you could try insulating your pipes – you can pick up pipe insulation at most DIY stores, and it is easy to cut and fit this to your pipes.

At basement windows – some basements have original, single glazed windows, and these might not fit as well as modern windows. Allowing air in during the summer will actually make things worse if the basement is cooler than the temperature of the air coming in from outside, causing major mould problems. Sealing around window frames, or simply replacing the window with something that performs better can reduce humidity and moisture problems. However, in the colder months opening  a window to let in cold air will help reduce damp, so long as the internal temperature of the basement is warmer than the outside air.

Draining system and downpipes – surprisingly, one of the reasons your basement is damp could be because of the water running off your roof. Check your downpipes and drainage areas to make sure they are unbroken and not leaking. If you can see that this is causing a problem, you could change the downpipes so that they are sitting further away from your walls, or even install a water barrel so that the rain channelled away from your roof doesn’t even reach the basement because it goes into the water barrel first.

Appliances – If your basement is being used for living then the temperature in the space in winter is likely to be higher but you will be putting more moisture into the air through bathing, showering, cooking, dry clothes, so it’s always advisable to install an extractor fan in your basement to remove humid air. A wet basement could be caused by excess moisture problems from your tumble dryer or from a shower room or bathroom. Because there is less natural ventilation in basement areas, you will need to make sure that extractor fans are powerful enough and that they are used every time the basement is in use. For tumble dryers and utility areas, make sure that your dryer is properly vented, so that no excess moisture builds up in the basement.

Dehumidifiers – Another affordable solution is the use of a dehumidifier. This helps to keep the relative humidity in a basement at a healthy level, removing many litres of water from the room’s atmosphere every day, giving drier air and a much better living environment. A dehumidifier will also support the work of an extractor fan, important when the space is used as a living space or where washing is dried, helping to dry clothes, whilst keeping the relative humidity at about 50%rh. If the basement is unheated then the temperature will be much closer to 14°C or colder in winter. In this case use a large compressor dehumidifier that has a capacity of 20L or 25L.  Smaller dehumidifiers like 10L and 12l models might well be cheaper but they do not have enough surface area on their cooling systems to be much use at these colder temperatures. Choose the size and type of dehumidifier that’s best for your basement space and set the relative humidity target so that the dehumidifier does all the work. 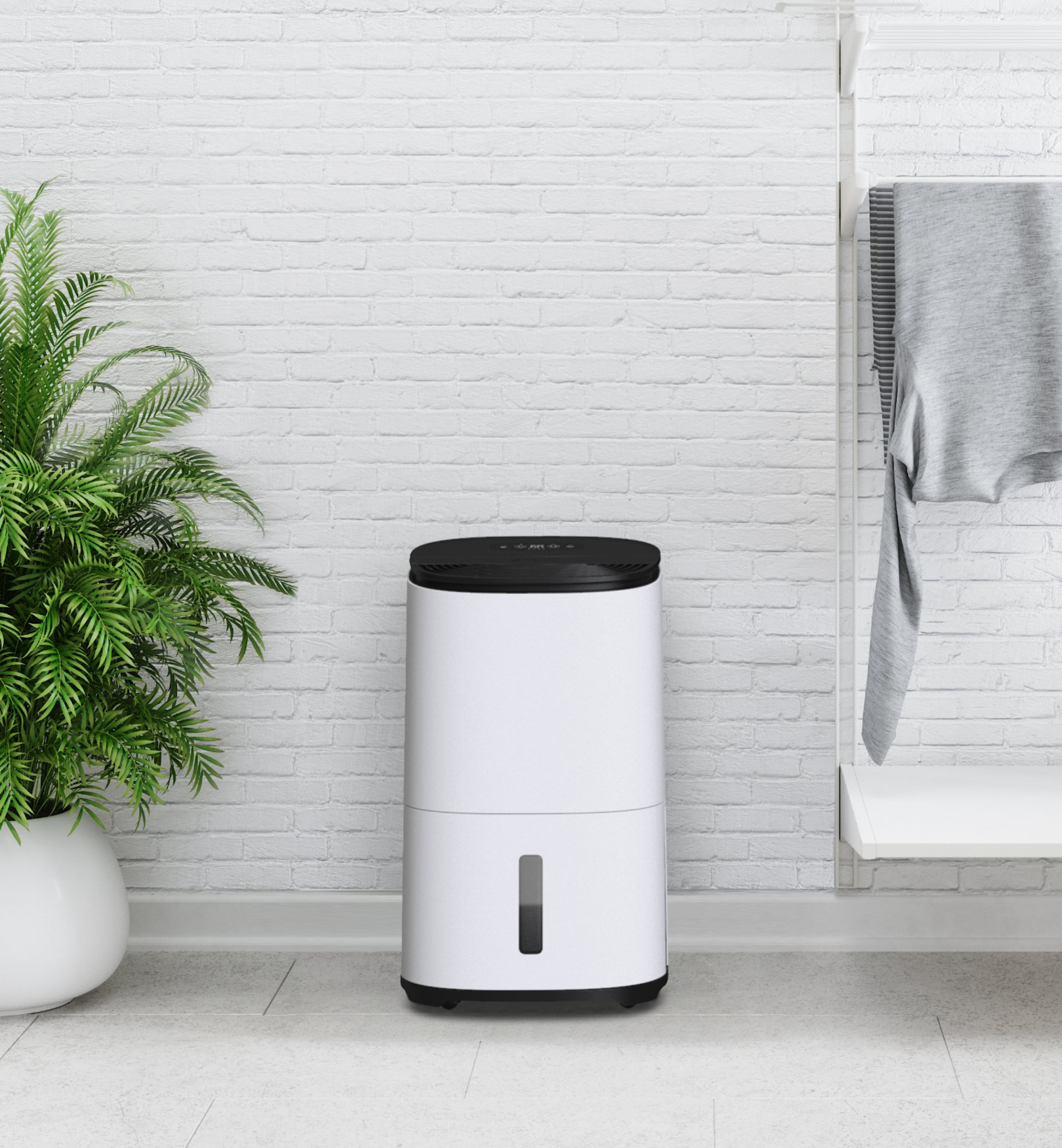 Meaco’s newest range of dehumidifiers , the MeacoDry Arete®, is ideally suited for use in basements. It was designed with simplicity of use in mind, ideal for spaces that are infrequently used, is a compressor dehumidifier and has large capacity at 20L and 25L. It has a unique specialised defrost system that allows dehumidifying without stopping right down to 10°. Arete just needs to be switched on and the machine does all the work, working out humidity levels and fan speeds, so simplifying the whole process. It also has a dedicated air purification mode using H13 medical grade HEPA air filters, so will both reduce moisture and clean the air creating a healthier living space in a space that can feel damp and unwelcoming.

In addition, the cutting-edge compressor technology in the Meaco Arete range provides the most energy efficient range of Meaco products yet, helping to alleviate rising energy cost concerns. The Arete One runs as quiet as just 40dB, which is quieter than rainfall, and the low noise levels of the 20L model has resulted in it being awarded a  Quiet Mark. Users of dehumidifiers often worry about how their machine will be emptied when the water tank is full and there is no one around to empty it, as in the case of a basement. Meaco, has solved this problem with a unique pump accessory designed to work with its new 20L and 25L Arete dehumidifiers. The pump is a game changer for the user, requiring no expertise to set up and install, and removing the worry and bother of having to empty the water tank by hand. As the pump allows for continuous drainage, the dehumidifier will not stop working when the water tank is full. Just turn on the dehumidifier and it will work 24/7.

These steps will help reduce the moisture in a basement area. Other options include basement waterproofing, which will help to seal the area against moisture. This might require a trench digging around the foundation wall, and might require professional help, but is a good way to protect a room. There are also waterproofing solutions for walls and flooring such as filling in any cracks or gaps in bare walls using specialist waterproof cement or putty. A waterproof coating can then be applied to help seal the brickwork or concrete more effectively.

Top Tip: Never have any furniture, clothes or storage boxes touching an outside wall, always leave a gap of a few centimetres, this should stop mould from growing on them.

Established in 1991 specialising in monitoring and control equipment for museums and art galleries, Meaco soon expanded its air purification range to include award-winning cooling products, dehumidifiers, air purifiers, humidifiers and heaters, distributed in over twenty countries throughout Europe, USA and South Africa. Meaco’s products cater for the needs of home and industry, plus specialist areas including boating, caravanning and swimming pools. In 2020, according to data from Google Trends, Meaco was consistently the most searched for dehumidifier brand in Britain, with over 130,000 dehumidifier sales. The huge increase in interest from the public in air treatment products has seen turnover trebled in the past two years, and an expansion in the UK workforce.

The modern choice of window frosting glass can serve your privacy concerns and is preferred for commercial buildings and residential homes.
Fashion