The landscape of jobs is constantly changing. Many of the careers that kids dream of today didn’t exist when their parents were young – but which jobs are really at the top of kids’ lists for when they grow up?

To find out, The Ellie Sparkle’s Show surveyed 1,000 kids aged 5-8 across the US to find out what they dream of becoming when they grow up, how they want to work and why they want to do it.

Since 81% of parents in the US said they regularly talk to their children about their career aspirations, the survey commissioned by the children’s entertainment show also asked 1,000 US parents what they dream of for their children’s future job roles.

Becoming A Doctor, Nurse or Healthcare Professional Tops The List of Childhood Dream Jobs In The US

When 1,000 kids across America were surveyed about their dream job growing up, over a quarter said they want to work in the health sector in the future. This was followed by becoming a teacher (16.5%) and a scientist (12%). 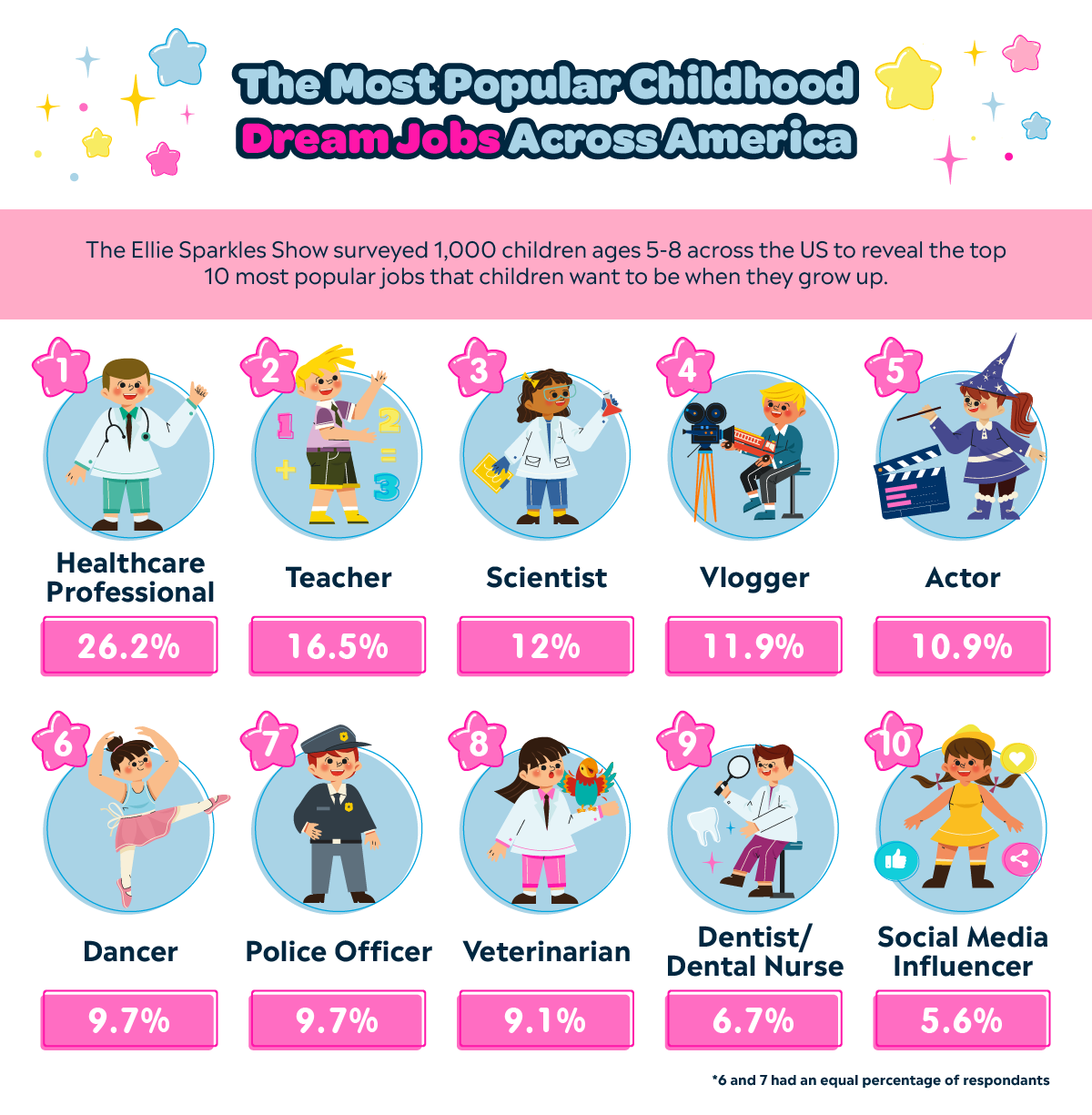 TikToker, Youtuber or Vlogger comes in 4th, above actor and police officer, which came 5th and 6th respectively. This is one example of a ‘dream job’ that would not have existed in previous generations.

The same kids were asked what the most important thing is to them in their future career – 35% said helping other people, followed by 28% who answered having fun.

The survey also asked parents what they felt is important for their children to achieve in their future careers. The top answer was that parents wanted their kids to prioritize being happy rather than concentrating on how much they earn (88%), followed by wanting their child to help others (71%).

Whilst only one in seven (13%) children surveyed said making lots of money was their top priority when they grow up, almost two thirds of parents (65%) felt that this is important.

This was followed by 53% wanting their child’s future job to contribute toward protecting the environment and 43% saying they think it is important for their child to be able to travel in their future job.

Parents have a big impact on their child’s future as the survey also revealed that 60% of kids said that their parents inspired them to pick their dream job. 24% also cited their favorite TV shows and films as their biggest career inspiration, 23% gave credit to their grandparents, and 22% said they were inspired by their favorite YouTubers. The survey revealed that kids across the US wish to work around 5 hours a day, 4 days a week.

It is clear from the survey results that children are looking to the future with a different perspective than that of previous generations. 73% said they want a flexible working structure (allowing them to choose whether they work from home or an office) whilst over half said they’d like to work from home all the time – a concept that would not have been considered a few years ago.

These are the top five things that kids want in their future jobs:

To see the full study and the top childhood dream jobs in each US state, please visit here.

Becoming a healthcare professional takes the top childhood dream job with 26% of children in the US wanting to pursue this career in the future. Over a third (35%) of kids in the US say the most important thing to them in their future career is helping others. 88% of parents say that their child’s happiness in their future job is more important than what they earn. Almost three quarters (73%) of kids say their dream job setup includes flexible or hybrid working

An advocate for persons with disabilities urged everyone to consider checking in with neighbors, friends or family members who may benefit from a helping hand.
Health