Minnesotans are preparing for another winter, and a new global study raises questions about how colder climates might see fewer days of ice cover on lakes.

The findings in the journal Nature Communications showed lakes in the Northern Hemisphere have seen ice melts happen sooner by an average of eight days, and the authors pointed to climate change.

Jerry Grundtner, president of the Forest Lake Lake Association, said recent ice-outs have varied, with some stretching into early May. But he added it is fair to think about the possibility of future issues.

“Earlier ice out means that vegetation has a more robust opportunity to grow more thick during the summer months,” Grundtner explained. “It also allows, I think, the water temperature to increase to a higher temperature, which causes more algae.” 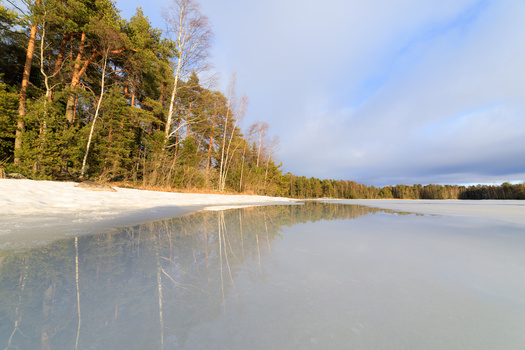 Researchers at the University of Minnesota have also been sounding the alarm about the links between a warming climate and the conditions of northern lakes. A study from last year found oxygen levels in the world’s freshwater lakes are declining at rates faster than in the oceans. And conservation groups say dry summers have fueled harmful algae growth on northern lakes.

As for earlier ice melts and the potential impact on lake recreation, Grundtner feels there is a double-edged sword. While fewer days of a frozen surface might shorten the ice-fishing season, he pointed out a longer ice-free season creates other concerns.

“There’ll be a lot more recreational boat use on any lake if ice goes off earlier,” Grundtner noted. “As more people use the lake, obviously, there’s more of a detriment to the lake by heavy use. So, you know, I think there’s an impact from a recreational standpoint also, on the water quality.”

Groups like Minnesota Lakes and Rivers Advocates have called attention to the growing prevalence of larger watercraft and the powerful waves they create, impacting shorelines. Meanwhile, a separate, new study from a University of Arkansas researcher predicts a dramatic increase in fish kills as lakes experience rising temperatures.

The Clean Water Act turns 50 this week, but parts of it are being challenged in a case before the U.S. Supreme Court.
Living

3 Ways to have a more Sustainable Halloween

Many are looking for ways to make Halloween more eco-friendly, so we’ve listed some suggestions below.