Many of the more than 4 million student-parents in the United States struggle with mental-health issues in college, and a new report says they need more emotional and financial support.

About 43% of student-parents describe feeling stressed all or most of the time, the report found, and 40% claim they feel overwhelmed.

Nicole Lynn Lewis just published a memoir of her own experience as a single, African American mother attending William and Mary College. She said financial hardships and facing parenting alone on campus were two major stressors.

“Having a support network would have been huge for me,” she said. “I was an anomaly at William and Mary. There were not a group of other parents and students that I could connect with and we could talk about our experiences, and it could be really difficult and isolating.” 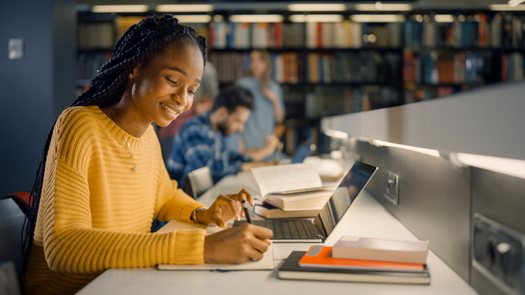 The report backed Lewis’s experience. Released by the Jed Foundation and Ascend at the Aspen Institute, it found that 54% of student-parents said they’ve felt “less than welcome” on occasion at their schools. Only 37% feel their school is supportive of them.

Lewis said she was a high school senior with college plans when she found out she was pregnant, and was sensitive about stereotypes of Black single parents. She said she had a good financial aid package, but still had to take out $30,000 in student loans. Lewis added that Black student parents have the most college-loan debt of any other group.

“You’re trying to cover expenses that go beyond tuition and fees. You’re trying to pay for food, housing; for child care,” she said, “and not to mention the fact that we know students of color are already coming into the college experience often with the racial wealth gap.”

Lewis now is chief executive of Generation Hope, a nonprofit that helps young parents earn college degrees. She said most Americans don’t realize that one in five college students is parenting, and nearly half of all Black female undergraduates have children. The report recommended providing more mental-health support for student parents on campus.